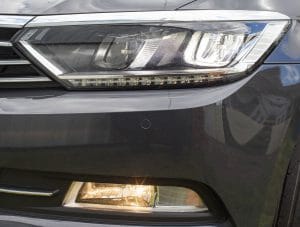 If you have ever driven at night and been temporarily blinded by another car’s high beams, we have some good news for you. A provision in the new infrastructure bill legalizes “adaptive driving beams,” a headlight technology already successfully in use outside the United States. These headlights adapt their high beams based on the environment around the vehicle, providing more visibility and eliminating issues with glare and reflection.

What are adaptive headlights?

Adaptive driving beams are headlights designed to respond to ever-changing road conditions. Using a system of LED lights, cameras, and sensors, adaptive driving beams can detect other cars on the road and darken an opening around those particular vehicles, while still allowing high beam light everywhere else. Oncoming cars can pass safely – without blinding light – while the adaptive beams still illuminate the rest of the road. Once the vehicle has passed, the beams return to full power.

An auto journalist who test-drove a German spec Porsche with adaptive beams described the experience to AutoBlog:

Following other cars is made safer, too. The high beams cut a perfect rectangle of shade out of the cars I follow, but stay up on both sides, allowing me to see forward and around the car directly in front of me. The extra light thrown could easily help me pick out a deer or other animal that would be hiding in shadow on the side of the road. It’s especially powerful on curves, as the light follows the car in front of you around the bend, staying just a beat behind it to keep from blinding the driver.

Some automakers even have adaptive headlights that project warning signs right onto the pavement, like the European Mercedes-Maybach S-Class. Its Digital Light technology can display a variety of graphics on the road to warn drivers of safety issues ahead, including:

These types of adaptive beams and headlights, however, are not currently available in the United States.

Why our current headlights are unsafe

In 2015, auto safety organizations like AAA were sounding the alarm about traditional halogen headlights (found on 80% of U.S. vehicles) versus more modern LED lights, like those found in adaptive headlights. AAA compared the performance between halogen and LED headlights and found the former can fail to safely illuminate the road for highway drivers.

In fact, they found that that halogen high beams only provide enough light to safely stop a vehicle at speeds of 48 miles per hour – leaving motorists vulnerable to car accidents on highways and open roads. Further, researchers found that only one-third of drivers even use their high beams on unlit roads.

Said Megan McKernan, manager of the Automobile Club of Southern California’s Automotive Research Center, “AAA’s test results reveal that headlights found in U.S. vehicles fall short on safety. By failing to properly light roadways at moderate speeds, a pedestrian or animal may not become visible to a driver until it’s too late to stop.”

Why are we not using adaptive beams already?

To understand why American cars need adaptive beams, we should take a historical look back into why, until now, car manufacturers have not been allowed to install them on their vehicles. Due to language under Federal Motor Vehicle Safety Standard § 571.108, adaptive driving beams are not permitted. This is because the rules specifically state vehicles must have both a low beam and a high beam, with nothing in between. Adaptive beams do not fit this regulation.

However, with the Infrastructure Investment and Jobs Act passed in November 2021, this will soon change. Under Section 24212, “Headlamps,” the Act now allows for the use of adaptive driving beam headlamp systems, along with required performance testing. The Insurance Institute for Highway Safety (IIHS) applauded this move, stating:

An update to headlight regulations to allow for adaptive driving beams is another item from the IIHS-HLDI wish list. The infrastructure bill instructs DOT to complete this within two years. IIHS tests have shown that many of today’s headlights do not provide adequate visibility, and research has shown that drivers do not take full advantage of high beams when appropriate. IIHS research showed that glare from adaptive high beams is lower than the glare from many of the low-beam systems sold in the U.S.

Although, as the IIHS mentions, it will take about two years until we see adaptive beams become the norm here in Los Angeles, it is a welcome change.

Can headlight glare cause car accidents?

Absolutely. According to a study from the IIHS, the better and higher-rated the headlight, the safer the vehicle. They found that their “good-rated headlights were associated with a 19 percent reduction in the nighttime single-vehicle crash rate, compared with poor-rated ones.” They also found in a 2016 study that all the headlight systems evaluated emitted 15 percent more glare than IIHS acceptable standards. However, in 2020, the average glare percentage dropped as manufacturers strived for better ratings.

It is important to note that the LED lights used in adaptive beams are not the same LED headlights currently blinding you in your rear-view mirror, as noted in a recent New York Times article. The issue with ultra-bright high beams on today’s vehicles, says Daniel Stern, chief editor of Driving Vision News, is because of the aim of the headlight and the “widespread availability of aftermarket LED bulbs and high-intensity discharge kits.”

Adaptive beams and high beam assist (which is already available in some U.S. vehicles) automatically senses an oncoming car and switches from high to low, which can reduce headlight glare and, hopefully, serious car and truck accidents.

If you were injured in a car accident, talk to the Los Angeles attorneys at McNicholas & McNicholas, LLP. Our experienced legal team can investigate your claim and work to recover compensation for your medical expenses, lost wages, and pain and suffering. We want to help. To schedule a free, remote consultation, call us today at 310-474-1582 or complete our contact form.