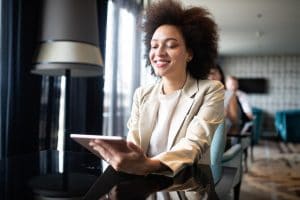 California recently added new protections against discrimination beyond those afforded by Title VII. The state’s new law, referred to as the CROWN (Creating a Respectful and Open World for Natural Hair) Act, went into effect on January 1st with the support of national coalition of organizations fighting to prevent discrimination based on appearance and hair.

California state legislature passed the CROWN Act unanimously as a result of its determination that many grooming policies and employer dress codes that currently prohibit natural hair such as twists, braids, and locks, have an unequal and unfair impact on individuals with textured hair. The conclusion made by California leaders and the Governor was that these policies are more likely to discourage black applicants and punish or unnecessarily burden black employees.

Expanding the definition of race to cover hairstyles

California’s CROWN Act modifies the California Fair Employment & Housing Act by including within the definition of “race” physical characteristics of an individual’s hair, including texture and hairstyle. Employers having five or more employees must abide by the anti-discriminatory measure.

The state of New York, taking the lead from California, became the second state in the union to outlaw hair discrimination in late 2019. The Governor of New York signed into law an amendment which modified the New York Human Rights Law, broadening the definition of race to include characteristics historically connected with race, such as protective hairstyles (braids, twists, and locks) and hair texture. The new law in New York took effect immediately and applies to employers that have at least four employees.

New Jersey also recently passed a ban on hairstyle discrimination with the Governor signing the bill into law on December 19, 2019, making it the third state to do so. The New Jersey Act also broadens the definition of race defined under its existing Law Against Discrimination.

Although only a few states and jurisdictions have instituted hairstyle discrimination bans to date, the concept seems to be gaining popularity.

If you have suffered discrimination by your employer, you need a strong advocate to help you protect your rights in the workplace. You deserve to be respected on the job. Our team at McNicholas & McNicholas, LLP is on your side to address any inequalities in your current work environment. To set up a free consultation with the Los Angeles employment attorney from our team, give our law office a call today at 310.474.1582 or complete our contact form.