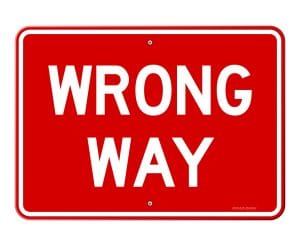 When you get behind the wheel of your car, you trust every other motorist to follow the rules of the road and drive safely and responsibly. This trust can be shattered when you are traveling down a one-way road and see headlights coming directly at you. One wrong-way turn can put a disoriented, drunk, or drowsy driver in the path of oncoming vehicles, an action that can have serious or deadly consequences.

According to an analysis by the AAA Foundation for Traffic Safety, “fatal wrong-way driving crashes on our nation’s highways are a persistent and devastating threat that is only getting worse.” They note that 2,008 Americans died from wrong-way car accidents on divided highways between 2015 and 2018 – an average of 500 deaths each year.

Dr. David Yang, executive director of the AAA Foundation, says, “Wrong-way crashes on divided highways are often fatal as they are typically head-on collisions. And unfortunately, as the data shows, fatalities from these crashes are on the rise.”

The Federal Highway Administration (FHWA) discusses wrong-way accidents and fatalities, reporting 428 in 2018, a jump from 415 in 2017. They define wrong-way driving crashes as:

The AAA study also used FHWA information in their report, which analyzed nationwide data to determine the most common factors contributing to wrong-way accidents and fatalities. Three factors stood out the most:

The special investigation Dr. Molloy mentions, even though released in 2012, is similar in nature to AAA’s research and includes more specific causes of wrong-way crashes. For example:

The NTSB also found that the three most common reasons wrong-way accidents occur are when a motorist:

It is important to note that, even though they may not happen often, wrong-way crashes are usually head-on collisions and therefore catastrophic or fatal accidents.

Is there a way to prevent wrong-way accidents?

In an effort to cut down on wrong-way crash deaths and injuries, the California Department of Transportation (Caltrans) and UC Davis recently completed a three-year pilot program testing various prevention measures. Some of these measures proved so effective, Caltrans has already implemented them into hundreds of miles of California highways, where UC Davis notes 37 Californians are killed each year in wrong-way accidents.

During the program, they installed and tested the following wrong-way prevention methods along various exit ramps in Sacramento and San Diego:

After monitoring these installations over the course of the pilot, Caltrans noticed the reflective pavement markers were particularly effective. In San Diego, wrong-way crashes decreased by a full 44 percent. Caltrans continues to install these pavement markers throughout the state.

Noted Caltrans Director Toks Omishakin, “Adding the two-way reflective markers proved to be so effective that Caltrans updated its statewide design standards. It’s a low-cost measure we can use throughout the state to deter wrong way drivers and potentially save lives on California’s highway system.”

How can I avoid a wrong-way driver?

Wrong-way drivers often appear out of nowhere, but you can avoid a tragic accident if you know what to do if you encounter one. Safety experts across the board, from AAA to the National Transportation Safety Board, offer advice when behind the wheel:

At McNicholas & McNicholas, LLP, our Los Angeles attorneys want to help if you or a loved one were injured in a car accident. Our years of experience and dedication make us the right choice when you need an advocate to help secure compensation for your medical expenses, lost wages, and pain and suffering. Get in touch by calling us today at 310-474-1582 or completing our contact form to schedule a free, remote consultation.